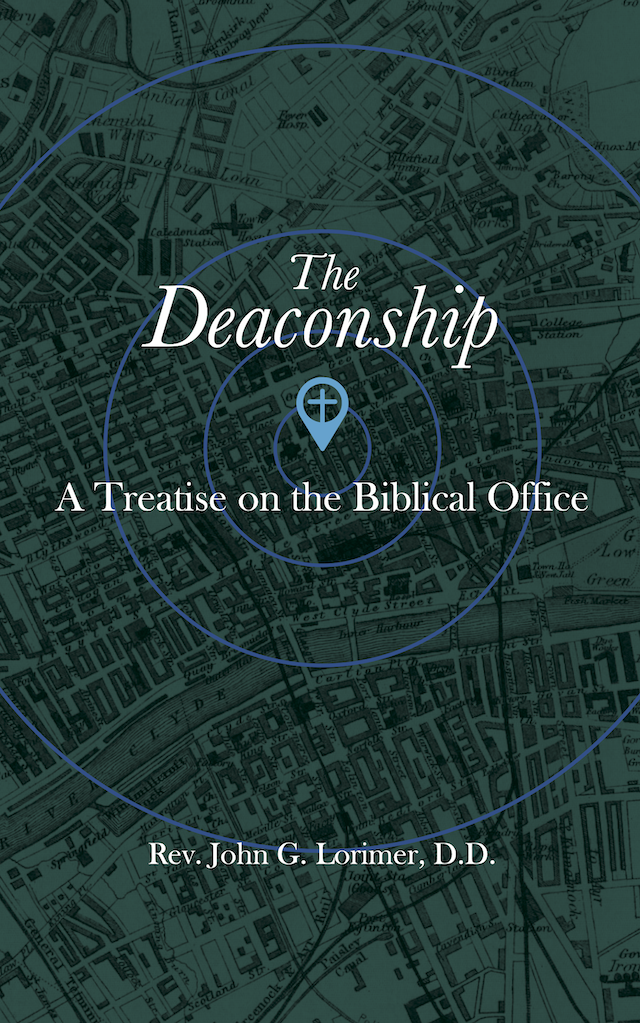 Yesterday, I released a Kindle edition of Rev. John Lorimer’s 1861 book “The Deaconship”. Lorimer was a founding minister of the Free Church of Scotland and an instrument in the revival of diaconal ministry in Scotland. One of my favorite parts of the book is this excerpt from Appendix III where Rev. Lorimer interviews a veteran deacon from Glasgow about his eighteen years of service.

Q. 2. What was the size of your district; how many families?

A. At my first survey the district contained 99 families of 476 individuals. Next year several additional deacons were appointed, and my proportion was reduced to 56 families of nearly 300 members. In 1831 some new houses were built, increasing the families to 81–359 members, and so on from year to year, till the population amounted to 117 families of 570 members.

Q. 3. What time did the charge occupy; did you easily over-take the management?

A. With 56 families, in ordinary circumstances, very little of my time was occupied, and my office was by no means irksome; but when the families increased to 80, 100, and upwards, I found it more difficult to keep up my acquaintance in the district, so that I had less comfort in going amongst them; and whilst my visits were in reality more requisite, they became less frequent. It is easy to keep up a pleasant familiar knowledge of a small number of families, which creates such interest as to carry one readily back to the district.

Q. 4. What were the general principles on which you acted in the management of the poor?

A. My first aim was to become acquainted with all the families, and when any person applied for relief, I visited and made a strict investigation, then gave in a report of the case at our first monthly meeting. If it was considered that further inquiry was requisite, or to relieve me of the odium of a refusal, if such was thought proper, another deacon was appointed to visit along with me.

Q. 5. What was the mode in which you sought to carry your principles into effect

A. If the applicant was out of work, or had children able for work, we need such means as were within our reach to get employment for them; or if they had any friends or relatives able to assist them, or were members of any dissenting congregation, we were required to apply to any or all of the quarters before granting any allowance.

Q. 6. How often were you in the habit of visiting your district?

A. The year 1819–20 was one of great depression and great hardship, and my visits were of course very frequent and very trying, as the operatives were almost in a state of rebellion, and many of them scowled upon me in defiance; but by steady perseverance I was enabled to overcome that feeling, and gained a knowledge of the people at that time, which made frequent visits less needful for years to come.

Q. 7. What topics did you find for conversation?

A. Education, week-day and Sabbath schools, were fruitful topics on my part, and poverty and distress never-failing ones on the part of the people.

A. Yes, with few exceptions; and in many cases most cordially welcomed, and much pressed to repeat my visit soon.

Q. 9. Had you any difficulty in ascertaining the exact truth? What means did you employ to reach it?

A. Where the people thought they had any interest in concealing it, or if they did not understand the object of my inquiries, I found it very difficult to get at the exact truth, and frequently have come away with a wrong impression; however, this helped to sharpen my ingenuity, though often baffled after all.

Q. 10. Do you remember particular cases of good being done, and of the expression of gratitude for your services?

A. I can recollect but a very few cases in which the relief afforded called forth any expression of gratitude, and that same from industrious well-doing folks, who were anxious to help themselves, and who had received from me some little acts of kindness besides the parish aid. Of course much real good was done.

Q. 11. Did you use means to prevent poverty; such as by encouraging education, church attendance, the savings’ bank, circulating Bibles, finding employment for those out of work?

A. The means stated in this query were used on various occasions, but none of them except the last when a person applied for parish aid; the others would not have gone well down with a starving family. The deacons were often very useful in finding work for the people.

Q. 12. In what would you say that the mainspring of your management consisted?

A. Kindness, prompt attention to every application, whether deserving or not; never administering help in ignorance to save myself the trouble of a visit; rigid investigation, &c. See answer to query 4th.

Q. 13. When the people got accustomed to the St John’s management, did they like it as well as that of other sessions?

A. For some years at first there was a strong prejudice against St John’s management,–alleging that they were deprived of the town’s hospital: and this was strengthened by partially from other parishes that ought to have known better; but, latterly, I had no complaints on that score, and our importe from other parishes in town were always greater than our exporte.

Q. 14. Was it as liberal in cases of real distress?

A. We were furnished with a list of the allowances made by the town’s hospital for cases beyond the sessional, and we were regulated by it; but, in some cases, such as palsy, &c., we were constrained to give a very liberal aliment.

Q. 15. Did you live near the district, or do you attach any importance to this?

A. I did not live in my district, but (though many of my brethren held a different opinion) I think it of very great importance that the deacon should do so, as it tends to save much of his time, and give him greater facilities in acquiring a knowledge of his district, as well as a benefit to the applicants themselves.

Q. 16. Are there any suggestions which occur to you as important in connexion with the management, such as regular attendance on the court of deacons, &c.?

A. I consider regular attendance at the deacons’ meetings of the utmost importance; it keeps up his interest, adds to his knowledge and experience, and strengthens the hands of his fellow-labourers. During my 18 years I declined all engagements which would interfere with those meetings, and was absent on only six or eight occasions, owing either to sickness or being necessarily from home. I think, also, the minister of the parish should be as often present as possible, and ought to make himself well acquainted with the working of the system, as his opinion will naturally have much weight with inexperienced hands.

If you enjoyed this interview, consider reading the whole book.