In his memoir of his life as a missionary in the Congo, my great-grandfather tells the story of his perseverance in meeting my great-grandmother.

From the time I was sixteen I prayed that the Lord would prepare a life partner for me, though I never had a date until I was twenty-one. Elmer and I were two lonely bachelors in the village of Heidelburg, Kentucky, while we built the Beechwood Seminary.

One day the mail brought a letter and a packet from my Aunt Alice in Philadelphia. The packet looked like a photograph. Thinking it was a picture of her kindergarten I waited until we reached our room at the hotel to open the mail. Here I quote from my diary dated October 9, 1911 :

What was my surprise upon opening the packet to find the picture of a beautiful young woman? I was not prepared to analyze my feelings, but as nearly as I can tell there were mingled a strong admiration and a hope that she was not an impossibility. The letter gave me a wonderful write-up of the qualities and accomplishments of this attractive young lady. Picture and letter together had quite an effect on me. I read the letter and looked at the picture time and again.

The lady was Miss Minnie C. Hauhart, from St. Louis, Missouri. After a visit with her sister on Long Island, there fell into her hands a call for a teacher in a school for Italians in Germantown. She answered and accepted the position. She boarded in the large beautiful home of Mrs. Beck, where my two aunts, my sister, and Grandfather lived. All of them admired and loved her, and she and Aunt Alice became close friends. At that time I was in Michigan. On her return to St. Louis she had sent this photograph to Aunt Alice.

Happening to visit there, my brother Martin saw the picture and went into raptures. He said he wished he were older. Aunt Alice told him he was too young, the lady was nearer Hershey’s age. He just wished Hershey could meet her. She explained that with Hershey in Kentucky and Miss Hauhart in Missouri there seemed to be no hope of a meeting. He teasedAunt Alice into sending me the picture. Here was the result.

Next day I wrote a letter accusing Aunt Alice of cruelty to bachelors. To Aunt Anna I wrote a letter full of serious questions, and concluded by asking whether she thought I would have any chance of winning the young lady’s hand. She answered in ways which indicated the highest esteem for Miss Hauhart, but to my final question she replied, “That is something you must find out for yourself.”

At my request Aunt Alice sent me Miss Hauhart’s address. As the two of them had discussed the possibility of volunteering for service in the Soul Winners Society I naturally supposed she would like to know more about it and my first letter offered to give her information direct from the field. I did not tell her I had her picture in my possession. Later I learned that she had been indignant at the idea of writing to a young man she had never met. Happily for me her sister from New York was visiting her home. She told Mignon she must not take things so seriously. She could reply, have a bit of fun, and break it off whenever she wished. So our correspondence began.

Both of us were invited to Germantown for the Christmas holidays, but she was not told that I would be there. When I arrived I was quite let down to find she had not come. In reply to my letter expressing disappointment she wrote: “If I had been all packed up to come, and had learned you were coming, I would have unpacked at once.” It sounded hopeless! But she added, “However, the family has agreed that if you have occasion to pass through St. Louis on your way to Kentucky you might stop over for a day.”

My prompt reply stated that I would make occasion to pass through St. Louis. (After all, it involved only 600 miles of extra travel, and my income was $25.00 per month!) Mrs. Beck kindly paid my expenses, Kentucky to Philadelphia to St. Louis to Kentucky. So I went to Missouri. On a fine clear morning in January her brother met me at the train and drove me to the picturesque country home near Manchester. I can never forget our first meeting in the living room where Edward introduced me. She was even more beautiful than her picture.

But she did not receive me as a long-lost brother. The welcome was very formal. The atmosphere was so cool that she gave me not the slightest encouragement when I asked for a photograph take with me. It did not seem best to tell her that I had suitcase the one borrowed from Aunt Alice.

Her blind father and brothers and sisters were friendly. Her mother had died when she was a little girl, so the older sisters mothered her. The visit was so pleasant I wished to return. Next day I took my departure with a promise to correspond and an invitation to come back in May.

Returning to Kentucky, my next assignment was to Rousseau on Quicksand Creek, 16 miles from the railroad over a road that was passable only on horseback much of the winter. Living in a roughly built house beside the Church on the mountainside, I preached and taught a little school and visited the people. Cooking and housekeeping were necessary sidelines, so I had plenty of time that winter to think how fine it would be to have a helpmeet.

We exchanged letters. I wrote her about the daily experiences in the community and school. She learned that one of the pupils was 16 years old, and took advantage of the opportunity to tease me about the girl. I replied that there was only one girl in the world for me. It was real fun until her next letter came which was just a line to say that if that was the way I was going to talk she had no date to set for my next visit.

I was heartbroken. I had felt so sure that she was the answer to my prayers of seven years, and here we had come to the end of the road! I told the Lord of my disappointment, but was able to say, “Nevertheless not my will, but thine, be done.” In spite of my earnest effort to accept whatever might be the Lord’s will, my mind kept going over the problem day and night for several days. Then one night I saw a ray of hope. After all, she was a school teacher. Besides, she had started this by teasing me about that girl. I thought I saw a way out. I wrote: “You are a teacher. Now suppose you had made a rule for your pupils against throwing snowballs.

And suppose you forgot, and yourself threw a snowball at one of the boys, could you blame him very much if he threw one back?” That did it. She relented, and wrote to say that I might come in May as originally planned. Thus I went in May for a visit of about five days. From my point of view she was the girl whom the Lord had chosen, the answer to my prayers. I loved her, and needed her as homemaker and helper in my work. I could not afford trips to Missouri, and it seemed the time was ripe for a yes or no decision during that visit. It was intolerable to think of the possibility that in my absence someone else might woo and win her, just because I had failed to let her know I loved her, and wanted her to be my wife.

Early in my visit, under the apple tree in that lovely yard, I brought her my proposal in the form of some verses I had composed for the occasion. Anxiously I waited four days to learn what she would do about my proposal. Then one night in the moonlight, in the open buggy slowly drawn by the old horse named Cleveland, I begged her to kiss me and say, “Yes.” At last, and quite reluctantIy, she agreed to marry me. My heart overflowed with joy.

My hope that we could be married in the fall was disappointed because Presbytery decided to send me to Seminary for three years. The engagement seemed awfully long. But in September 1915 we were married at her home in the presence of her father and all her brothers and sisters.

I brought her to my parishioners at Berry Boulevard Church, and all my people fell in love with her. Our life partnership had really begun.

Two years later we were on the way to Congo. 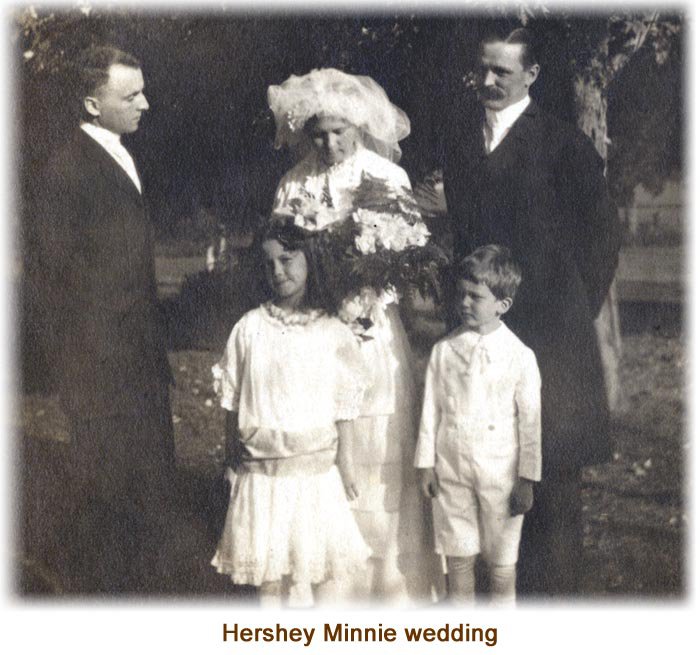 (The whole book is available online.)