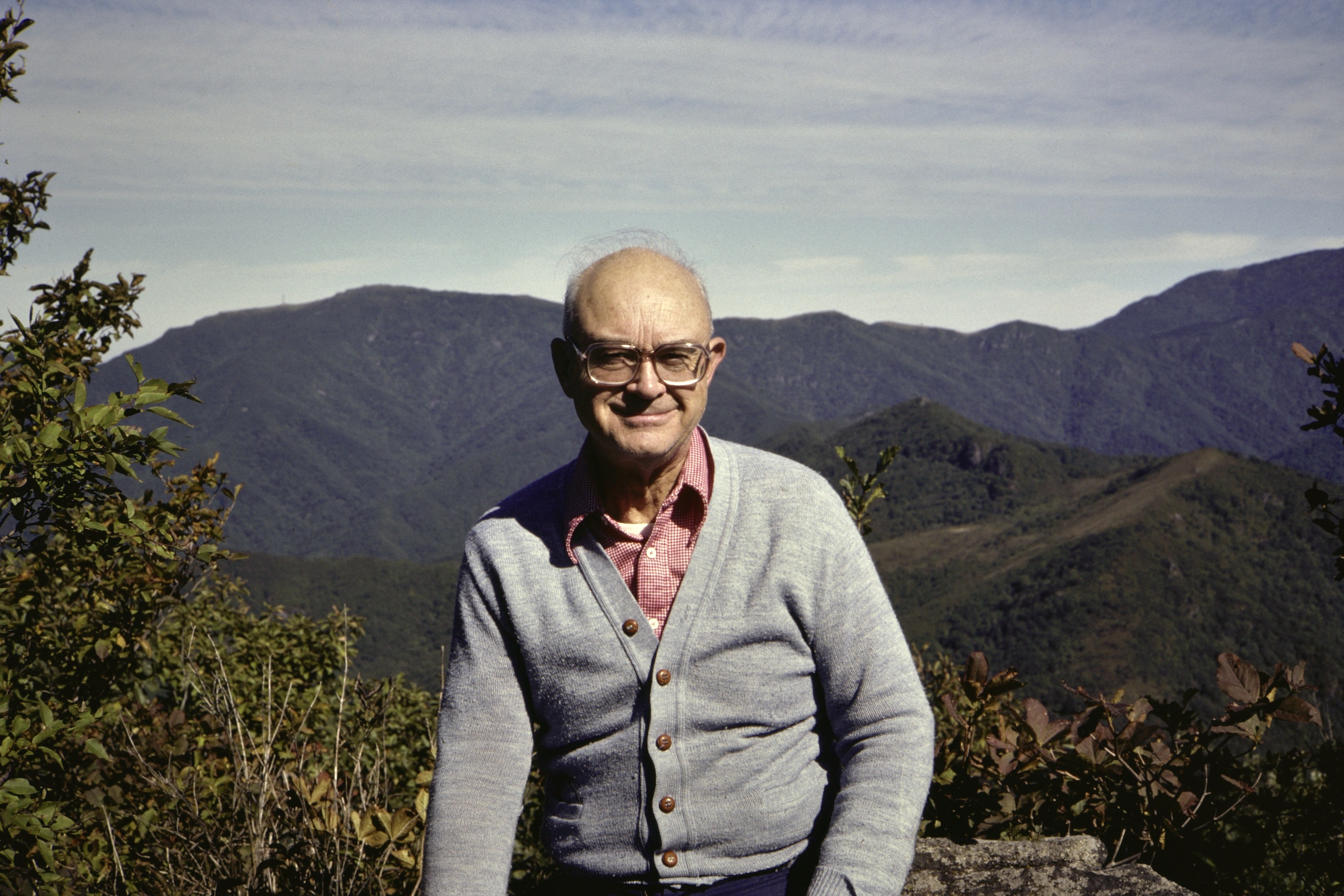 Eulogy for my grandfather Joe B. Hopper, retired missionary of Korea, written by his brother-in-law G. Thompson Brown.

The text that best describes the ministry of Joe. B. Hopper in Korea is Romans 15:19–21:

I have fully preached the gospel of Christ, thus making it my ambition to preach the gospel not where Christ has already been named, lest I should build on another man’s foundation, for it is written: “They shall see who have never been told: they shall understand, who have never heard of him.”

I first met Joe in the fall of 1937 when I arrived from China at the Pyengyang Foreign School in North Korea and was introduced to my new room mate. Even in those high school days, Joe felt a clear call to be a missionary evangelist. Through four years at Davidson as his room mate and three decades in Korea as a colleague, I never knew that resolve to falter.

Joe made it his “ambition to preach the Gospel not where Christ had already been named.” Apart from his family this was his only ambition.

(1) Joe was a pioneer evangelist. His assignment was to plant churches in the rugged mountainous regions of North Chulla Province. This he did, not by sensational preach but by:

Pioneer Evangelism was a team effort. Joe and Dot together. Dot worked with the women. There was home visitation in the country villages, and visiting prisoners in the penitentiary and patients in the hospital. After the children were old enough to be on their own, Joe and Dot they traveled together to the more distant mountainous villages pulling a little house trailer behind their jeep.

A few days ago David Hopper and I went through Joes tiny study where his books and files were meticulously kept to see if we could find any record of the members he had received into the church. We found what we were looking for in a little black book. The record of the Korean war years was missing but beginning with 1952 and continuing through 1986, it was all there… the totals of each year were carefully recorded. The grand totals for the 34 years:

And you can be sure that each was done with careful instruction and examination.

(2) Joe was a great hunter of the elusive Korean pheasant. In fact some of us suspected that one reason why he was so attracted to his North Chulla field of service and why he enjoyed it so much was that here was some of the best pheasant hunting in Korea! Joe’s hunting exploits were legendary. Get his sons Barron and David to tell you about some of them. One of his tales was that when he was traveling by jeep between several churches for Sunday, services, scores of pheasants came out of the barley patches and rice paddies and lined up along the side of the road, making faces at him–knowing that Joe’s gun would have to remain silent on the sabbath day! Unfortunately, there was no one else present to verify the accuracy of the tale.

(3) Joe was sometimes known as the Bishop of North Chulla. It was a term used sometimes in jest, sometimes out of respect, sometimes in awe. It was an appropriate term which spoke of Joe’s leadership and long years of service. But a more accurate description of Joe’s role would be that of Presbyter. Joe was a pioneer but he was never a loner. Joe believed fervently in the Presbyterian system and he made it work. For Joe the Presbytery was central. It was the network that held together the churches that Joe began. The Presbytery brought order, continuity, and permanence into Joe system of church development. Joe served his presbytery often as trouble shooter, sometimes as a conscience or gadfly, and always as a servant. In times of division and schism, Joe worked tirelessly as peacemaker and reconciler. The crowning moment in the planting of a church was when the presbytery would ordain and install the pastor the congregation had chosen and Joe could turn his attention to the next promising preaching point.

How many churches did Joe start? I asked him that question two weeks ago after he had been admitted to the intensive Care Unit. “How many were they, Joe… a hundred?” His reply: “Probably not quite that many, but I did have my hand in starting quite a few.” My guess is that it was well over a hundred.

(4) Joe was a scholar. He was single-minded but not narrow-minded. He was a linguist. He was publisher and editor of the journal for country church workers named Pok Twen Malsum (“The Blessed Word”}. It was nothing fancy or erudite, but contained solid Bible studies and preaching aids for pastors, lay evangelists, and elders.

Joe was a scholar, but his scholarship existed not for its own sake but only for one purpose: “For he had made it his ambition to preach the Gospel where Christ had not been named.” Joe spoke the plain man’s English and the plain man’s Korean. And the common people heard him gladly.

(5) Joe had a pioneer’s suspicion of institutional structures. Some institutions, structures and committees were doing a great job–but let someone else worry with them…they were not Joe’s “cup of borie tsai (Korean barley tea)!” Some structures were necessary evils and simply had to be endured. Some committee work and structures Joe excelled in—but always the institution and its structures had to be kept at arms length. For too easily it could become a diversion or a distraction from his goal. And he had made it his “ambition to preach the Gospel where Christ had not been named.”

(6) Joe was a trainer of pastors. Through a carefully administered scholarship program, promising young men were sent to the Presbyterian Seminary in Seoul or the Ho Nam Seminary in Kwangju. He and, I think, his good friend R. K. Robinson worked out a plan for seminary interns after their graduation. Instead of having an assistant, to which he was entitled, he would choose a young man from the seminary each year who would be his co-worker for that year. At the end of the year the man would then move on to a pastorate and Joe would choose another candidate for the next year. In this way numerous seminary graduates received practical experience in country work and were introduced to Joe’s way of doing mission.

On several occasions Joe was asked to be a member of the Board of Trustees for the Ho Nam Seminary. He steadfastly refused, saying that as long as his brother-in-law was the president, he felt it inappropriate for another family member to become involved. But when the brother-in-law left the seminary for other assignments, Joe was elected to be chairman of the seminary board and was able to pilot the seminary through some difficult times–a relocation of the campus, a major building program, and the selection of a new president.

By the early 1980s the church situation in North Chulla had dramatically changed from the time when he had first arrived. Presbyterian churches in the province now numbered at least six hundred. The number had doubled and tripled. Well over two hundred pastors now served the churches of the province. I wonder if Joe didn’t begin to feel somewhat “penned in”, sharing the sentiments of the Apostle Paul when he wrote to the Romans saying “since I no longer have any room for work in these regions”, he was thinking of striking out for Spain (Rom. 15:23-24).

So Joe and Dot began spending more and more time each year on the island of Cheju off the southern coast of Korea. The unevangelized islands were calling and Joe had made it his “ambition to preach the Gospel where Christ had not been named.”

During the last days waiting at the hospital, two verses scriptures came to mind. One was that magnificent passage where Jesus stands before the tomb of Lazarus. The other was Revelation 1:17-18:

Fear not, I am the first and the last, and the Living One; and I was dead, and behold I am alive for evermore and I have the keys of death and of Hades.

The Lord is the keeper of the keys! Its not fate, or chance, or good or bad luck. It’s not the machines in the Intensive Care Unit. The Lord holds the keys!

And sometimes he stands on this side of the tomb and cries with a loud voice “Lazarus, come forth!” And Death, humbled and obedient opens the gate, and Lazarus comes forth. And then the command:“Loose him and set him free!” And the grave clothes that had bound him fall away, and Lazarus is whole and free again.

And sometimes the Lord stands on the other side of the tomb. But he is still the keeper of the keys. And he cries with a loud voice “Joe, come on over. It;s better for you on this side.” And Death, humbled and obedient, opens at the gate, and Joe crosses over. And then the command “Loose him and set him free!” And tubes, the wires, the cables and the connections to the respirator fall away and Joe is whole and free again.